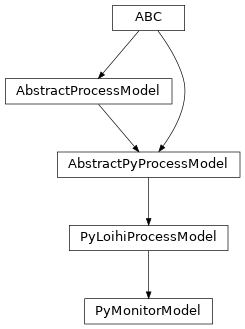 This process model contains prototypical Ports and Vars to have one-to-one correspondes with Monitor process.

Guard function that determines if post lrn mgmt phase will get executed or not for the current timestep.

During this phase, RefPorts of Monitor process collects data from monitored Vars

During this phase, InPorts of Monitor process collects data from monitored OutPorts

Monitor process to probe/monitor a given variable of a target process.

Note: Monitor currently only supports to record from a singe Var or Port.

Fetch and return the recorded data.

The recorded data is fetched, presented in a readable dict format and returned.

Plot the recorded data into subplots.

Can handle recordings of multiple processes and multiple variables per process. Each process will create a separate column in the subplots, each variable will be plotted in a separate row.

Creates one prototypical RefPort, InPort and two Vars. This ensures coherence and one-to-one correspondence between the Monitor Process and ProcessModel in terms og LavaPyTypes and Ports/Vars. These prototypical ports can later be updated inside the probe() method.

Note: This is separated from constructor, because once multi-variable monitoring is enabled, this method will be deprecated.

Probe a Var or OutPort to record data from.

Record the target for num_step time steps, where target can be a Var or OutPort of a process.