Lava is an open-source software library dedicated to the development of algorithms for neuromorphic computation. To that end, Lava provides an easy-to-use Python interface for creating the bits and pieces required for such a neuromorphic algorithm. For easy development, Lava allows to run and test all neuromorphic algorithms on standard von-Neumann hardware like CPU, before they can be deployed on neuromorphic processors such as the Intel Loihi 1/2 processor to leverage their speed and power advantages. Furthermore, Lava is designed to be extensible to custom implementations of neuromorphic behavior and to support new hardware backends.

Lava can fundamentally be used at two different levels: Either by using existing resources which can be used to create complex algorithms while requiring almost no deep neuromorphic knowledge. Or, for custom behavior, Lava can be easily extended with new behavior defined in Python and C. 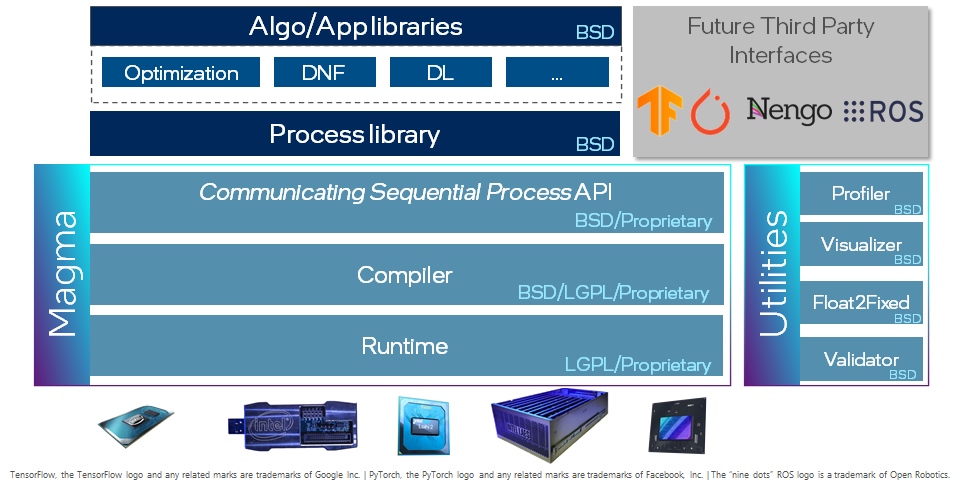 This tutorial gives an high-level overview over the key components of Lava. For illustration, we will use a simple working example: a feed-forward multi-layer LIF network executed locally on CPU. In the first section of the tutorial, we use the internal resources of Lava to construct such a network and in the second section, we demonstrate how to extend Lava with a custom process using the example of an input generator.

In addition to the core Lava library described in the present tutorial, the following tutorials guide you to use high level functionalities: - lava-dl for deep learning applications - lava-optimization for constraint optimization - lava-dnf for Dynamic Neural Fields

1. Usage of the Process Library

In this section, we will use a simple 2-layered feed-forward network of LIF neurons executed on CPU as canonical example.

The fundamental building block in the Lava architecture is the Process. A Process describes a functional group, such as a population of LIF neurons, which runs asynchronously and parallel and communicates via Channels. A Process can take different forms and does not necessarily be a population of neurons, for example it could be a complete network, program code or the interface to a sensor (see figure below). 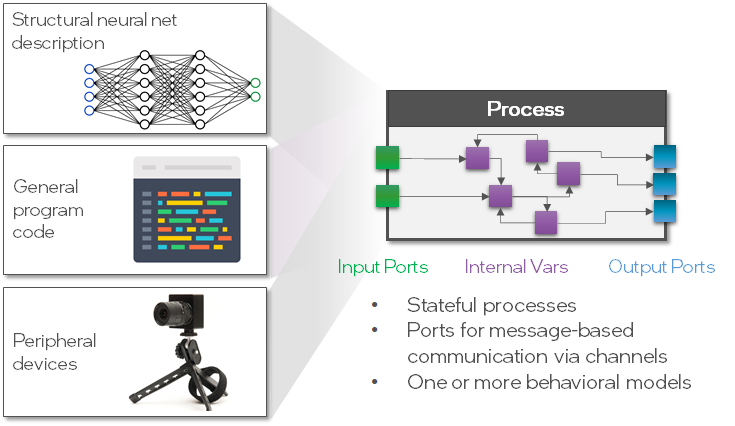 Let’s start by importing the classes LIF and Dense and take a brief look at the docstring.

The docstring gives insights about the parameters and internal dynamics of the LIF neuron. Dense is used to connect to a neuron population in an all-to-all fashion, often implemented as a matrix-vector product.

In the next box, we will create the Processes we need to implement a multi-layer LIF (LIF-Dense-LIF) network.

As you can see, we can either specify parameters with scalars, then all units share the same initial value for this parameter, or with a tuple (or list, or numpy array) to set the parameter individually per unit.

Let’s investigate the objects we just created. As mentioned before, both, LIF and Dense are examples of Processes, the main building block in Lava.

The Vars are used to store internal states of the Process while the Ports are used to define the connectivity between the Processes. Note that a Process only defines the Vars and Ports but not the behavior. This is done separately in a ProcessModel. To separate the interface from the behavioral implementation has the advantage that we can define the behavior of a Process for multiple hardware backends using multiple ProcessModels without changing the interface. We will get into more detail about ProcessModels in the second part of this tutorial.

For example, we can see the size of the Port which is in particular important because Ports can only connect if their shape matches.

Similarly we can investigate the input port of the second LIF population.

Now that we know about the input and output Ports of the LIF and Dense Processes, we can connect the network to complete the LIF-Dense-LIF structure.

As can be seen in the figure above, by connecting two processes, a Channel between them is created which means that messages between those two Processes can be exchanged.

Similar to the Ports, we can investigate the Vars of a Process.

Vars are also accessible as member variables. We can print details of a specific Var to see the shape, initial value and current value. The shareable attribute controls whether a Var can be manipulated via remote memory access. Learn more about about this topic in the remote memory access tutorial.

We can take a look at the random weights of Dense by calling the get function.

Note: There is also a set function available to change the value of a Var after the network was executed.

In order to record the evolution of the internal Vars over time, we need a Monitor. For this example, we want to record the membrane potential of both LIF Processes, hence we need two Monitors.

We can define the Var that a Monitor should record, as well as the recording duration, using the probe function.

Note: Currently, the Monitor can only record a single Var per Process and supports only CPU. This functionality will be extended in future releases.

Now, that we finished to set up the network and recording Processes, we can execute the network by simply calling the run function of one of the Processes.

The run function requires two parameters, a RunCondition and a RunConfig. The RunCondition defines how the network runs (i.e. for how long) while the RunConfig defines on which hardware backend the Processes should be mapped and executed.

Let’s investigate the different possibilities for RunConditions. One option is RunContinuous which executes the network continuously and non-blocking until pause or stop is called.

The second option is RunSteps, which allows you to define an exact amount of time steps the network should run.

For this example. we will use RunSteps and let the network run exactly num_steps time steps.

Next, we need to provide a RunConfig. As mentioned above, The RunConfig defines on which hardware backend the network is executed.

For example, we could run the network on the Loihi1 processor using the Loihi1HwCfg, on Loihi2 using the Loihi2HwCfg, or on CPU using the Loihi1SimCfg. The compiler and runtime then automatically select the correct ProcessModels such that the RunConfig can be fulfilled.

For this section of the tutorial, we will run our network on CPU, later we will show how to run the same network on the Loihi2 processor.

Finally, we can simply call the run function of the second LIF process and provide the RunConfig and RunCondition.

After the simulation has stopped, we can call get_data on the two monitors to retrieve the recorded membrane potentials.

Alternatively, we can also use the provided plot functionality of the Monitor, to plot the recorded data. As we can see, the bias of the first LIF population drives the membrane potential to the threshold which generates output spikes. Those output spikes are passed through the Dense layer as input to the second LIF population.

As a last step we can stop the runtime by calling the stop function. Stop will terminate the Runtime and all states will be lost.

In the previous section of this tutorial, we used Processes which were available in the Process Library. In many cases, this might be sufficient and the Process Library is constantly growing. Nevertheless, the Process Library can not cover all use-cases. Hence, Lava makes it very easy to create new Processes. In the following section, we want to show how to implement a custom Process and the corresponding behavior using a ProcessModel.

The example of the previous section implemented a bias driven LIF-Dense-LIF network. One crucial aspect which is missing this example, is the input/output interaction with sensors and actuators. Commonly used sensors would be Dynamic Vision Sensors or artificial cochleas, but for demonstration purposes we will implement a simple SpikeGenerator. The purpose of the SpikeGenerator is to output random spikes to drive the LIF-Dense-LIF network.

Let’s start by importing the necessary classes from Lava.

All Processes in Lava inherit from a common base class called AbstractProcess. Additionally, we need Var for storing the spike probability and OutPort to define the output connections for our SpikeGenerator.

The constructor of Var requires the shape of the data to be stored and some initial value. We use this functionality to store the spike data. Similarly, we define an OutPort for our SpikeGenerator.

As mentioned earlier, the Process only defines the interface but not the behavior of the SpikeGenerator. We will do that in a separate ProcessModel which has the advantage that we can define the behavior of a Process on different hardware backends without changing the interface (see figure below). More details about the different kinds of ProcessModels can be found in the dedicated in-depth tutorials (here and here). Lava automatically selects the correct ProcessModel for each Process given the RunConfig.

We first import all necessary classes from Lava.

All ProcessModels defined to run on CPU are written in Python and inherit from the common class called PyLoihiProcessModel. Further, we use the decorators requires and implements to define which computational resources (i.e. CPU, GPU, Loihi1NeuroCore, Loihi2NeuroCore) are required to execute this ProcessModel and which Process it implements. Finally, we need to specify the types of Vars and Ports in our SpikeGenerator using LavaPyType and PyOutPort.

Note: It is important to mention that the ProcessModel needs to implement the exact same Vars and Ports of the parent process using the same class attribute names.

Additionally, we define that our PySpikeGeneratorModel follows the LoihiProtocol. The LoihiProtocol defines that the execution of a model follows a specific sequence of phases. For example, there is the spiking phase (run_spk) in which input spikes are received, internal Vars are updated and output spikes are sent. There are other phases such as the learning phase (run_lrn) in which online learning takes place, or the post management phase (run_post_mgmt) in which memory content is updated. As the SpikeGenerator basically just sends out spikes, the correct place to implement its behavior is the run_spk phase.

To implement the behavior, we need to have access to the global simulation time. We can easily access the simulation time with self.time_step and use that to index the spike_data and send out the corresponding spikes through the OutPort.

Note: For the SpikeGenerator we only needed an OutPort which provides the send function to send data. For the InPort the corresponding function to receive data is called recv.

Next, we want to redefine our network as in the example before with the exception that we turn off all biases.

We instantiate the SpikeGenerator as usual with the shape of the fist LIF population.

Now that our network is complete, we can execute it the same way as before using the RunCondition and RunConfig we created in the previous example.

And now, we can retrieve the recorded data and plot the membrane potentials of the two LIF populations.

As we can see, the spikes provided by the SpikeGenerator are sucessfully sent to the first LIF population. which in turn sends its output spikes to the second LIF population.

If you want to find out more about Lava, have a look at the Lava documentation or dive deeper with the in-depth tutorials.