A software framework for neuromorphic computing

Lava is an open-source software framework for developing neuro-inspired applications and mapping them to neuromorphic hardware. Lava provides developers with the tools and abstractions to develop applications that fully exploit the principles of neural computation. Constrained in this way, like the brain, Lava applications allow neuromorphic platforms to intelligently process, learn from, and respond to real-world data with great gains in energy efficiency and speed compared to conventional computer architectures.

The vision behind Lava is an open, community-developed code base that unites the full range of approaches pursued by the neuromorphic computing community. It provides a modular, composable, and extensible structure for researchers to integrate their best ideas into a growing algorithms library, while introducing new abstractions that allow others to build on those ideas without having to reinvent them.

For this purpose, Lava allows developers to define versatile processes such as individual neurons, neural networks, conventionally coded programs, interfaces to peripheral devices, and bridges to other software frameworks. Lava allows collections of these processes to be encapsulated into modules and aggregated to form complex neuromorphic applications. Communication between Lava processes uses event-based message passing, where messages can range from binary spikes to kilobyte-sized packets.

The behavior of Lava processes is defined by one or more implementation models, where different models may be specified for different execution platforms (“backends”), different degrees of precision, and for high-level algorithmic modeling purposes. For example, an excitatory/inhibitory neural network process may have different implementation models for an analog neuromorphic chip compared to a digital neuromorphic chip, but the two models could share a common “E/I” process definition with each model’s implementations determined by common input parameters.

Lava is platform-agnostic so that applications can be prototyped on conventional CPUs/GPUs and deployed to heterogeneous system architectures spanning both conventional processors as well as a range of neuromorphic chips such as Intel’s Loihi. To compile and execute processes for different backends, Lava builds on a low-level interface called Magma with a powerful compiler and runtime library. Over time, the Lava developer community may enhance Magma to target additional neuromorphic platforms beyond its initial support for Intel’s Loihi chips.

The Lava framework currently supports (to be released soon):

Processes are the fundamental building block in the Lava architecture from which all algorithms and applications are built. Processes are stateful objects with internal variables, input and output ports for message-based communication via channels and multiple behavioral models. This architecture is inspired from the Communicating Sequential Process (CSP) paradigm for asynchronous, parallel systems that interact via message passing. Lava processes implementing the CSP API can be compiled and executed via a cross-platform compiler and runtime that support execution on neuromorphic and conventional von-Neumann HW. Together, these components form the low-level Magma layer of Lava.

At a higher level, the process library contains a growing set of generic processes that implement various kinds of neuron models, neural network connection topologies, IO processes, etc. These execute on either CPU, GPU or neuromorphic HW such as Intel’s Loihi architecture.

Various algorithm and application libraries build on these these generic processes to create specialized processes and provide tools to train or configure processes for more advanced applications. A deep learning library, constrained optimization library, and dynamic neural field library are among the first to be released in Lava, with more libraries to come in future releases.

Lava is open to modification and extension to third-party libraries like Nengo, ROS, YARP and others. Additional utilities also allow users to profile power and performance of workloads, visualize complex networks, or help with the float to fixed point conversions required for many low-precision devices such as neuromorphic HW. 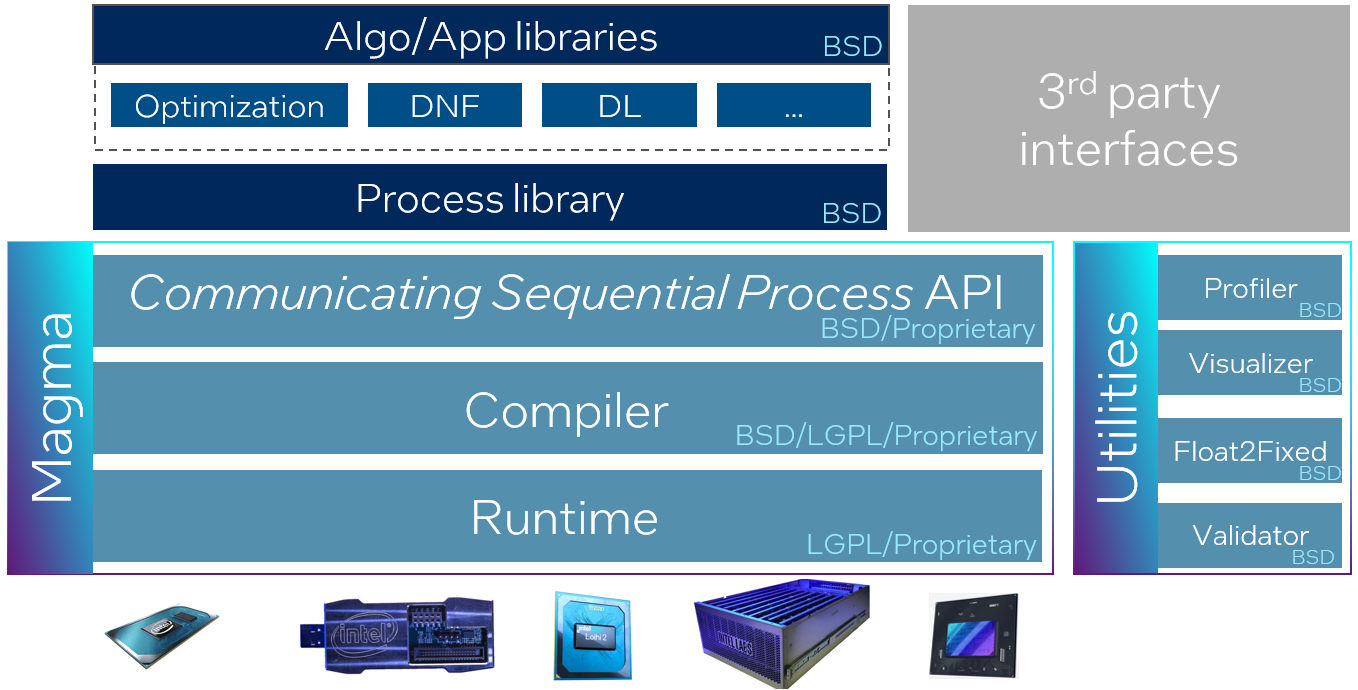 All of Lava’s core APIs and higher-level components are released, by default, with permissive BSD 3 licenses in order to encourage the broadest possible community contribution. Lower-level Magma components needed for mapping processes to neuromorphic backends are generally released with more restrictive LGPL-2.1 licensing to discourage commercial proprietary forks of these technologies. The specific components of Magma needed to compile processes specifically to Intel Loihi chips remains proprietary to Intel and is not provided through this GitHub site (see below). Similar Magma-layer code for other future commercial neuromorphic platforms likely will also remain proprietary.

A process has input and output ports to interact with other processes, internal variables may have different behavioral implementations in different programming languages or for different HW platforms.

Process models are used to provide different behavioral models of a process. This Python model implements the LIF process, the Loihi synchronization protocol and requires a CPU compute resource to run.