The task is to learn to transform a random Poisson spike train to produce output spike pattern that resembles The Radcliffe Camera building of Oxford University, England. The input and output both consist of 200 neurons each and the spikes span approximately 1900ms. The input and output pair are converted from SuperSpike (© GPL-3).

It shows usage of ``slayer.io`` module. The module provides a way to

The network can be described with a combination of individual synapse, dendrite, neuron and axon components. For rapid and easy development, slayer provides block interface - slayer.block - which bundles all these individual components into a single unit. These blocks can be cascaded to build a network easily. The block interface provides additional utilities for normalization (weight and neuron), dropout, gradient monitoring and network export.

In the example below, slayer.block.cuba is illustrated.

Running the network in GPU is as simple as selecting torch.device('cuda').

A slayer.io.Event can be visualized by invoking it’s Event.show() routine. Event.anim() instead returns the event visualization animation which can be embedded in notebook or exported as video/gif. Here, we will export gif animation and visualize it.

Since the target spike train

is known for this problem, we use SpikeTime loss here. It uses van Rossum like spike train distance metric. The actual and target spike trains are filtered using a FIR filter and the norm of the timeseries is the loss metric.

Plotting the learning curves is as easy as calling stats.plot().

Load the best model during training and export it as hdf5 network. It is supported by lava.lib.dl.netx to automatically load the network as a lava process.

Here, we will use slayer.io.tensor_to_event method to convert the torch output spike tensor into slayer.io.Event object and visualize the input and output event.

Event data can be accessed as slayer.io.Event.{x, y, c, t, p} for x-address, y-address, channel-address, timestamp and graded-payload. This can be used for further processing and visualization of event data. 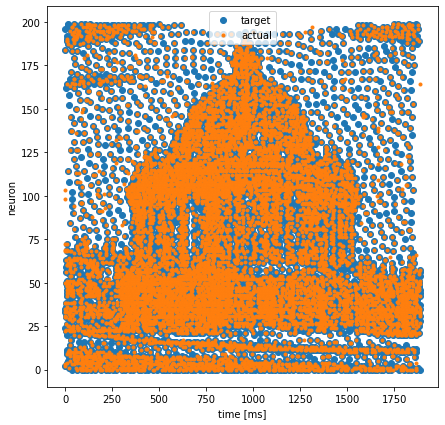